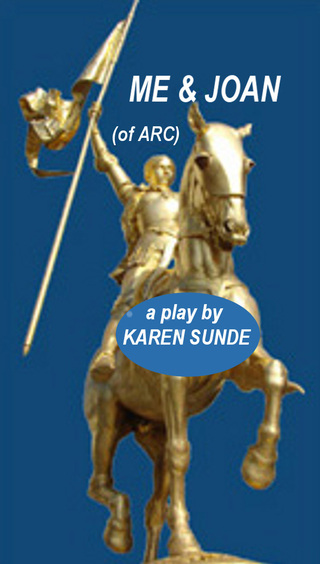 Suicidal stand-up comic Lili meets Joan of Arc; and, playing her side-kick, makes war on "the Fathers of the Church" exploring sexuality, love, guilt, faith, and the place of women.

Though almost Banned In Philadelphia, a Catholic priest wrote the play is: “a very authentic interpretation of St. Joan of Arc…renders more clearly than [Shaw or Anouilh] her religious faith…relates Joan to modern feminism."

ME & JOAN (first titled La Pucelle) was conceived and directed by Ken Marini at Cheltenham Center for the Arts. In an interview with the Philadelphia Inquirer, he said: “Joan is a spiritual woman, but she has lost her physical self, and Lili is a very physical woman who has lost her spiritual self. They are like a single woman who has been divided, and it’s time to reunite the two selves…”

PLAYS INTERNATIONAL (London)
“Joan projects magnificent power and grace, while Lili embodies contemporary sexual energy and charm. .. Despite the fact (the play) reaffirms both Lili's faith and ours, the locals went ballistic and vowed to close it. ...Sunde's take …nevertheless proves sympathetic toward St Joan and her spirituality”

THE PHILADELPHIA INQUIRER Clifford A. Ridley
“Crossing the paths of two outcast young women – one of great spirituality but no worldly experience, the other of abundant sexuality, but no faith … having them reach out across the centuries, bringing the assumptions of two vastly different times and cultures to their search … (is) intriguing. … Her (Lili’s) wry, cut-to-the-chase curiosity is meant to be funny, and it is. But what particularly impressed me was the sweet, unaffected nature of the exchange … in which we hear the authentic, unedited voices of these two interesting women as they seek to share a common search for integrity and purpose across a gaping cultural divide.”

ABOUT THAT ATTEMPT TO BAN IT!

VILLAGE VOICE Porter Anderson (New York)
“A holy backfire has occurred at Cheltenham Township on the fringe of Philadelphia, where a group of Roman Catholics freaked at a preview of La Pucelle, (ME & JOAN) …many more Catholics who never saw the show jumped on the pageant bandwagon…: some 200 zealots … descended on the township’s commissioners’ meeting and persuaded the commission to “request” that the center close the show. …(the Center) refused to shut the show, although the feckless faithful protested outside its scheduled closing. The theater’s own congregation grew by 30% on the controversy. And best of all, the commissioners finally did see the show… ‘and they loved it! The theater came out way ahead’”…