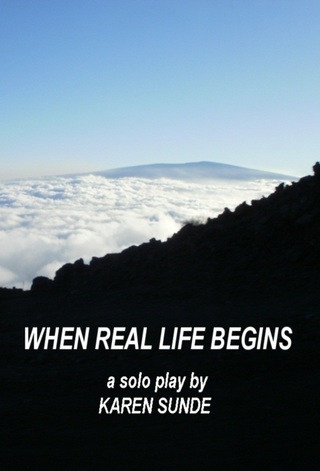 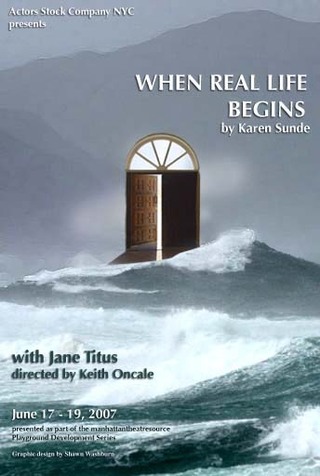 “Unforgettable. ... You wish it would stop, but know you’d feel robbed if it did.”

“Extraordinary solo play about passion, love, and theatre. Top Recommendation of the Week”

Karen Sunde's ''When Real Life Begins'' presents a formidable task to the actor who is its sole voice: she has to create a character who finds a new life while struggling to comprehend what is happening to her dying husband, and to summon up his presence, which has greater force than her own personality.

In the Chain Lightning Theater production at the Connelly Theater in the East Village, Raye Lankford's realization of the role is as intellectually engaging as it is emotionally disturbing. There are several times in this hourlong play when you wish it would just stop, but you know you would feel robbed if it did.

It is possible that people who know nothing of the real story lying behind it will find it easier to take than those who know at least a little; this is the odd case in which a viewer feels at times that intimacy shared is an invasion.

Ms. Sunde draws the work from the lives of Claire Higgins, the artistic director of Chain Lightning and thus the producer here, and her husband, Kricker James, an actor with whom she founded the company in 1991. James died of cancer three years ago, and the play is a tribute to him, written at the request of Ms. Higgins.

The couple may be called Anne and Sam in this realization, but it is hard to think of them as simply characters in a drama, especially when the performance opens and closes with affectionate references to a tramp who turns up at a widow's house when her dead husband's body is not yet cold, an apparition James himself made unforgettable when he took the role of that tramp in John Millington Synge's ''In the Shadow of the Glen'' on this stage only two months before he died.

Ms. Lankford and the director, Ken Marini, concentrate on the great emotional upheaval and growth of Anne as she speaks directly to the audience -- treating it as another character -- about her life with Sam, who becomes more vital and energetic as death draws closer. There is little grieving. One has to search for that behind Anne's frustration with Sam, because he wants only to get on with life while he's living rather than help her understand his situation, or in her scorn for a friend who objects that Sam is far too ill to take the leading role in a play about Chekhov's final hours.

The play's title comes from Sam's remark to her that ''it isn't till hope is gone that real life begins,'' and it is only when Anne can bring herself to admit -- and to take pleasure in knowing it -- that ''he's demanding to die onstage no matter what,'' that she can embrace theater without him and create a role for herself in it. For the most part the sense of loss is transformed by Anne's sense of humor, never more poignantly or effectively than when she analyzes the ridiculous complications of a promise the dying Sam extracts from her: ''Anne, you're too young for this. Promise me you'll love again.''

In the end the woman who tells the story is a great deal more than a survivor. But it is the dead man she wants you to understand who leaves the theater with you. It's an appropriate honor: Kricker James certainly made Synge's tramp someone you were happy to take home with you.