ARTICLE about IN A KINGDOM BY THE SEA by Ian Williams

IN A KINGDOM BY THE SEA
click to order Kingdom in PLAYS BY KAREN SUNDE, Broadway Play Publishing

Developed with Michael Dixon at Actors Theatre of Louisville 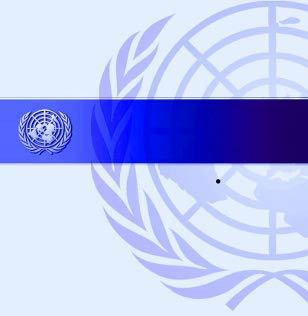 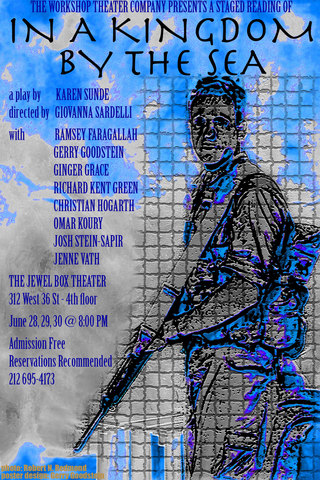 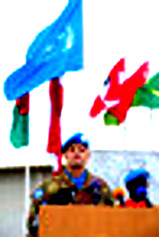 The New York Screenplay Contest
"This is a dazzling script. It sounds authentic and is genuinely tense. In 1988 Lebanon, an American colonel with the UN peacekeeping force disappears. Based on the real life kidnapping of Colonel Higgins, it's a mystery, an international thriller, but at its core a drama about what would possess Colonel "Hogan" to seek out his own kidnappers. A bold, compelling concept ...moves fast, relentlessly forward ... Character amazing ... dialogue first rate, exciting ...sure to be remembered by anyone who reads it."

US Marine's mission detonates the UN

Jason Lasky's class at United World College, Dilijan, Armenia skype-interviews Karen about KINGDOM
Click to request the Screenplay
What They're Saying about  KINGDOM

"Its power, intensity & pace remind me of BLACKHAWK DOWN”

“I was so astonished at its power I went again the next night.”         Paula Hajar, producer

"haunting, heart-wrenching…questions the nature of heroism”   Yuanxin Zhou, Stanford U

"Ms Sunde traveled to the Middle East to research a play about UN peacekeeping forces”.            THE NEW YORK OBSERVER

Click to order IN A KINGDOM BY THE SEA (the play)

WHAT STUDENTS at Stanford say about KINGDOM...

“…Theories must be grounded in the brutal realism of terrorist acts… In IN A KINGDOM BY THE SEA, we are treated to an in-depth look at how war and terrorism affect one soldier. …Hogan, a Marine, of whom the audience could say, “Hey, I know him!” …is the cocky, brash American we love… I feel I understand the emotions surrounding terrorist acts and their victims better than I ever have before.” --David Baron

“…provocative…suspenseful…volatile the climate of confusion, double-crossing, and secrecy that characterize terrorist activity and the strategies of networks working next to each other… IN A KINGDOM BY THE SEA exposed the fragile and tenuous relationships between opposition groups, who balance a distant respect for each other’s missions with tit-for-tat strategy.” --Tori Babin

IN A KINGDOM BY THE SEA is a haunting and multifaceted view of the consequences of occupation, extremism and idealism through the eyes of both the perpetrators and victims of terrorism. …Sunde’s power of characterization emerges…subtly heart-wrenching, telling a story of individual lives and emotions, as well as their place in a stark environment of conflict and violence. …This play questions the nature of heroism, the politics of peacekeeping and the values which have shaped both the societies that have condemned terrorists and those that have created them. -- Yuanxin Zhou

“IN A KINGDOM BY THE SEA relates to terrorism in the most poignant way by representing the struggle both sides face to determine what is right and what is wrong. … The way Sunde juxtaposes these characters causes the audience to ponder who is in the right. …the human side of terrorism…a valiant commentary magnifying the intense cultural differences and barriers in the way of resolving cross-cultural conflicts. --Anna Strohl

HOGAN
Sunrise. It's on Beirut, golden wash, gleaming, pastels...astonishing. And Sunday. The boys are nested, having a last dream, an extra half hour. (Beat) I saw his grin. Like he was sharing a secret. Dark beard, dark blue shirt, blurred past the gate. His big truck, yellow, sitting alone in the lobby, looked silly. Then came the orange white flash, too loud to hear, glued skin to my cheekbones, wind...lifted the rooms, pulled out their air, set four stories down in one pile.

Some boys woke with their ceiling in bed, and the floor above and its ceiling and the next, too strange to believe. They said God, oh God help me. Now I lay me down to sleep. The boys covered in ash, scattered, parts without arms, without heads, caught in trees, never woke, but were found by boys who never slept after. And the boys with head and arm hanging free, bodies crushed between slabs, dripping slow...red on grey ash, when they woke, those were the worst.

So I'd say to Laurel, (Dramatic) "I can see them coming...right up the field, barreling, every single one over 300 pounds. They'll crush me, punc-tuate my sweet body with their brutal cleats. I'm gonna hurt sooo much. They're gonna kill me tonight!"

Then she'd hang onto the locker, double over laughing-- "Hogie, you un-regenerate, un-mitigated dumbhead! Why do you do it?! Don't go out for team. Be the mascot. You could waddle out there just the same." (Picks up football) What could I say to her?

Should I have asked her what she sees? Jumping up, shrieking...her dimpled knees red as cheeks? What's she see that's so goddamned exciting in some muddy heap sprawled and grunting on the ten yard line? If she can answer me that, then I'll know why I do it.

3. A Shi-ite and Sunni discuss resistance

HAJJ: This Lebanon, this beauty--endlessly trampled and raped...by the West, by the East, by Israel--she's ours. Help us, Sharif. We struggle, with nothing--women with rocks, children with shouts, old men with sticks--making miracles.

HAJJ: Your heart, my brother, knows our pain. Is this our country? If it's my car and our road, why must I carry their license to travel it? Why may they shoot me if my car lacks a passenger? If I park my car to go gather berries, why may they blast it to hell?

When may I stop asking why? When they come to crush my village with tanks? When to stroll round my house in a tender moon is to die, because I'll be shot if I'm seen? When they round up our men, shepherds, tailors, and ship them away... Why?

Because they suspect, because we won't give in, because one has a name like one they've been given. When all these fail, and our leaders are still not destroyed, why do they plant death in our house of worship, thirty pounds, set to blast the moment relief, the meeting, the people ...convene.

SHARIF: (Silence, moved) Yes, I know...who has done all this.

4. Beirut, dark. “Stranger on the Shore” segues into small-arms fire—

HOGAN: ... There was this bridge, the deadliest crossing in Beirut--buildings towering, both sides, called sniper's alley. And for days there was murderous fire. Nothing live dared sniff the air. Any vehicle forced to cross would hit the bridge at racing speed. Then, in the midst of all the firing, for no reason, a woman began to cross, on foot. The instinct was--scream, stop her, pull her back. But she couldn't hear, she was too far, and she kept crossing. Then it happened. (Awed) Silence. The firing stopped. Why? Maybe they were all just...astonished. The report said "A woman, showing signs of insanity..." That was how they made sense of it. ...

Click to order IN A KINGDOM BY THE SEA